If the exchange of ideas and goods had a sound, what would it be? Perhaps it’s an egg sizzling violently on a hot grill. Or a set of hands delivering puffs of pigment to a balding man’s head with a vintage atomizer. Or one hand spanking a quivering tower of turquoise gelatin.

At least that’s the case in the sublimely bizarre video installations of Mika Rottenberg.

The artist, who was born in Argentina, raised in Israel and is now based in New York, has a knack for taking the invisible systems that govern our lives — ideological, economic and cultural — and illustrating them in ways you can practically taste. You don’t watch a video by Mika Rottenberg so much as you absorb it through all of your senses.

You can expect those senses to be stimulated to the max in a pair of shows currently on view in Los Angeles. At Hauser & Wirth, Rottenberg has a solo exhibition, now in its final two weeks, featuring a number of the video and installation pieces that appeared in the traveling exhibition “Easypieces,” which originated at New York’s New Museum in 2019. In addition, this Saturday the artist is hosting the U.S. premiere of her first feature-length film, “Remote,” made in collaboration with filmmaker Mahyad Tousi, at the Museum of Contemporary Art Los Angeles. 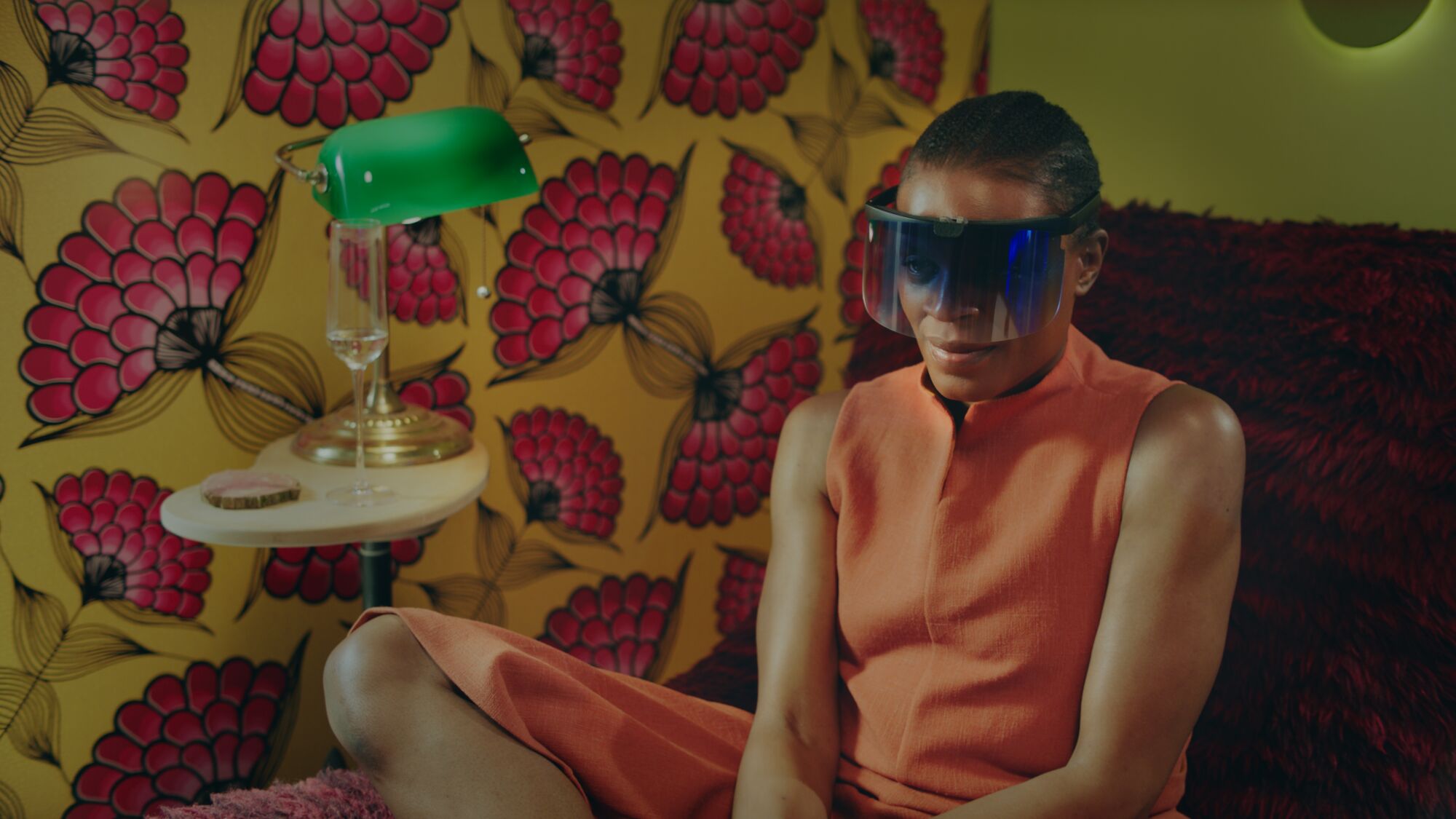 This uncanny picture, which was filmed during the COVID-19 pandemic, centers on a woman named Unoaku (played by the magnetic Okwui Okpokwasili) who comes into contact with a curious coterie of peers online. Unoaku is housebound for reasons that remain undisclosed. All we know is that she dials into work via a futuristic headset and every afternoon she clangs a pot at her window, in largely the same way people in cities like New York banged pots in honor of healthcare workers early in the pandemic. In the evenings, she settles in to view her favorite interactive show, hosted by a Korean dog groomer — a program that begins to reveal strange things about Unoaku’s place in the world.

In that way, the film evokes many of the themes in Rottenberg’s earlier video works.

In the 18-minute “Spaghetti Blockchain,” from 2019, on view at Hauser & Wirth, she juxtaposes a bewildering array of footage: a Tuvan throat singer leads to the Large Hadron Collider at CERN, which segues into industrial rooms stuffed with computer servers, which give way to a hand scraping a block of damp clay with a small bristle brush, which leads to a combine harvester pulling potatoes out of the earth.

If it all seems totally random, it isn’t. The piece is bound by its own internal logic. There are synergies of pattern and sound: The furrows in the damp clay allude to the potato field; the throat singer’s vibrational notes are echoed by the hum of computer processors.

In key scenes, the viewer is confronted with a strange mechanical structure, in the shape of a hexagon, that delivers a satisfying click with each rotation — each cell revealing a strange scene within, such as the frying egg and the jiggling Jell-O. The cells all seem to resonate with each other as well as other video footage, which continuously circles itself. 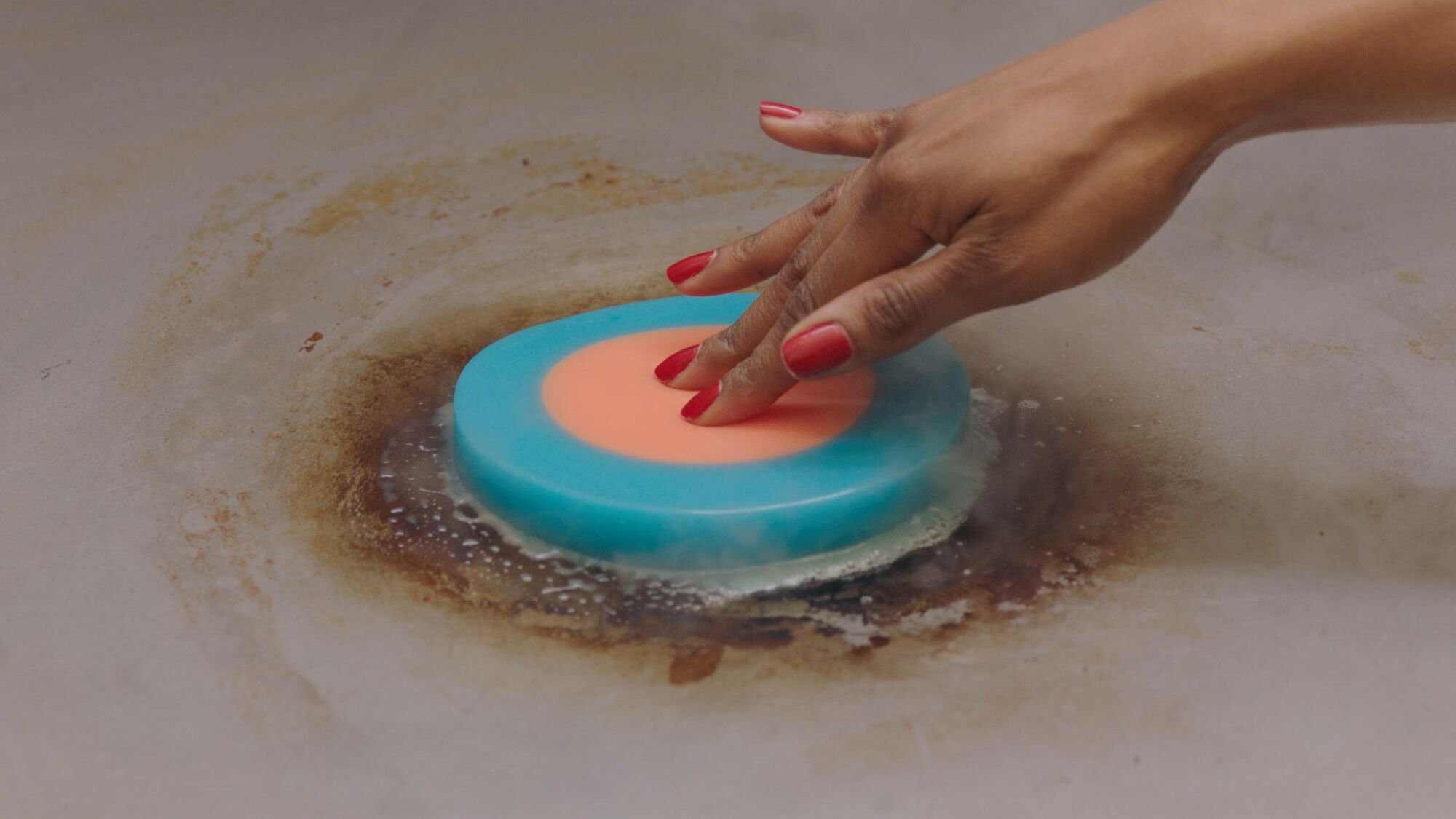 A still from “Spaghetti Blockchain,” 2019, shows a woman’s hand pushing a piece of brightly colored gelatin into a grill.

Everything relates to everything else; there is no beginning, no end and no central node. It’s as if Rottenberg converted the concept of a distributed network into analog form — and filmed it.

And she did it while nodding to the exaggerated aesthetics of social media: There are colors that pop and sounds that worm their way into your deepest lizard brain. In an interview with art historian Julia Bryan-Wilson for the “Easypieces” catalog, Rottenberg described herself as obsessed with the category of videos deemed “most satisfying” on YouTube, which often depict compulsively watchable acts of painting, crushing, painting, spreading, scooping and cutting.

“I really wanted to create my own ASMR factory,” she said. 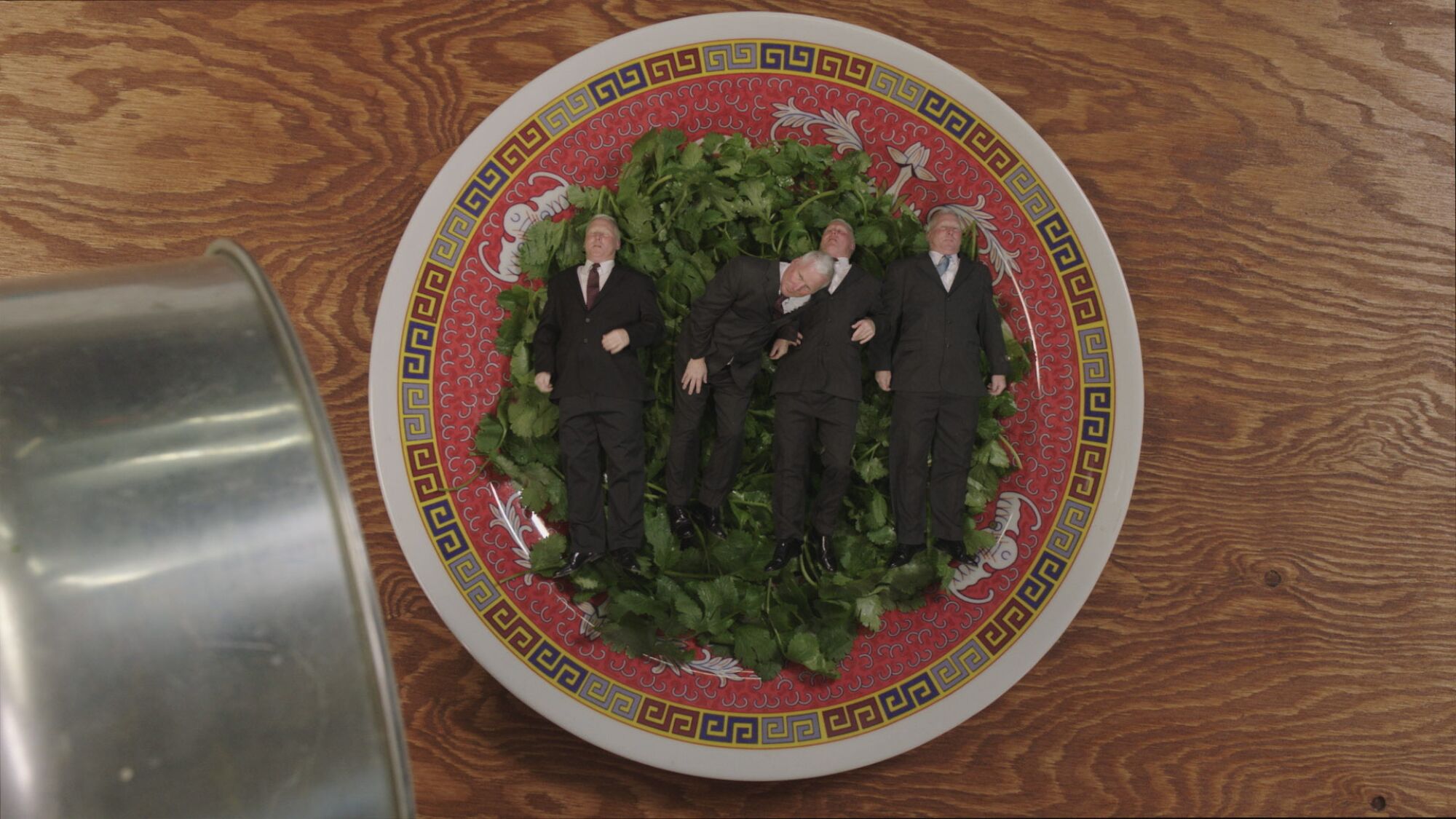 Another work, titled “Cosmic Generator,” from 2017, hits closer to home. Over 26 minutes, Rottenberg takes us between the U.S. and Mexican border towns of Calexico and Mexicali, and a famed wholesale market in Yiwu, China. These are settlements connected by trade, but also history: Mexicali is where many of the Chinese immigrants who helped build California’s railroads ended up at the turn of the 20th century after being pushed out by anti-Asian legislation in the U.S.

Rottenberg addresses this history in singular ways. Images of Mexicali’s Chinese restaurants, with their flamboyant architecture and their regal names — Imperial Garden, China Royal Salute — give way to scenes in Yiwu. A mechanical maneki-neko cat, forever waving from a restaurant’s cluttered counter, leads to a stall stuffed with similar cats back at the Chinese wholesaler. Suited businessmen and a guy in a taco suit crawl back and forth through an underground tunnel. Food and capital penetrate the border; people, not so much.

Rottenberg is serious about tracking globalization, but she isn’t self-serious about it. “Cosmic Generator” is a tour de weird — one that begins with the viewer entering the gallery at Hauser & Wirth through a tunnel of the artist’s design.

Ultimately, her images are much more than images. They are sensations. Water gurgles. Light bulbs are smashed. The viewer is plunged down rabbit holes that mysteriously appear under the dome of a specialty dish at a Chinese restaurant. In an artist talk for the Magasin III Museum for Contemporary Art in Stockholm in 2013, Rottenberg said that in choosing or creating the environments she filmed, she wanted to make the viewer “think about how it would feel to touch it or lick it.”

That’s not far off base. Though I’d say that rather than licking the work, it’s more as if you have been licked by it. And after that, things are never the same. 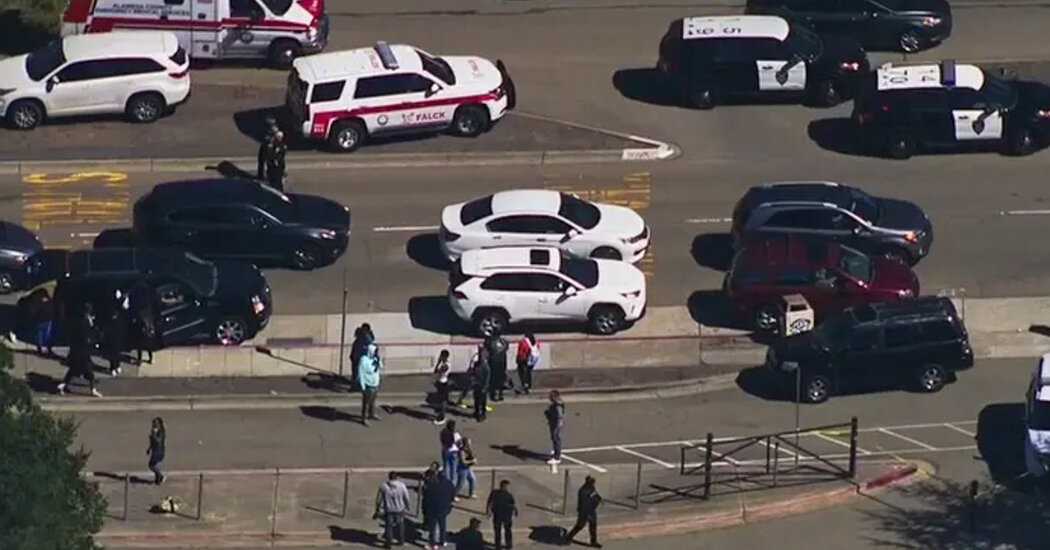 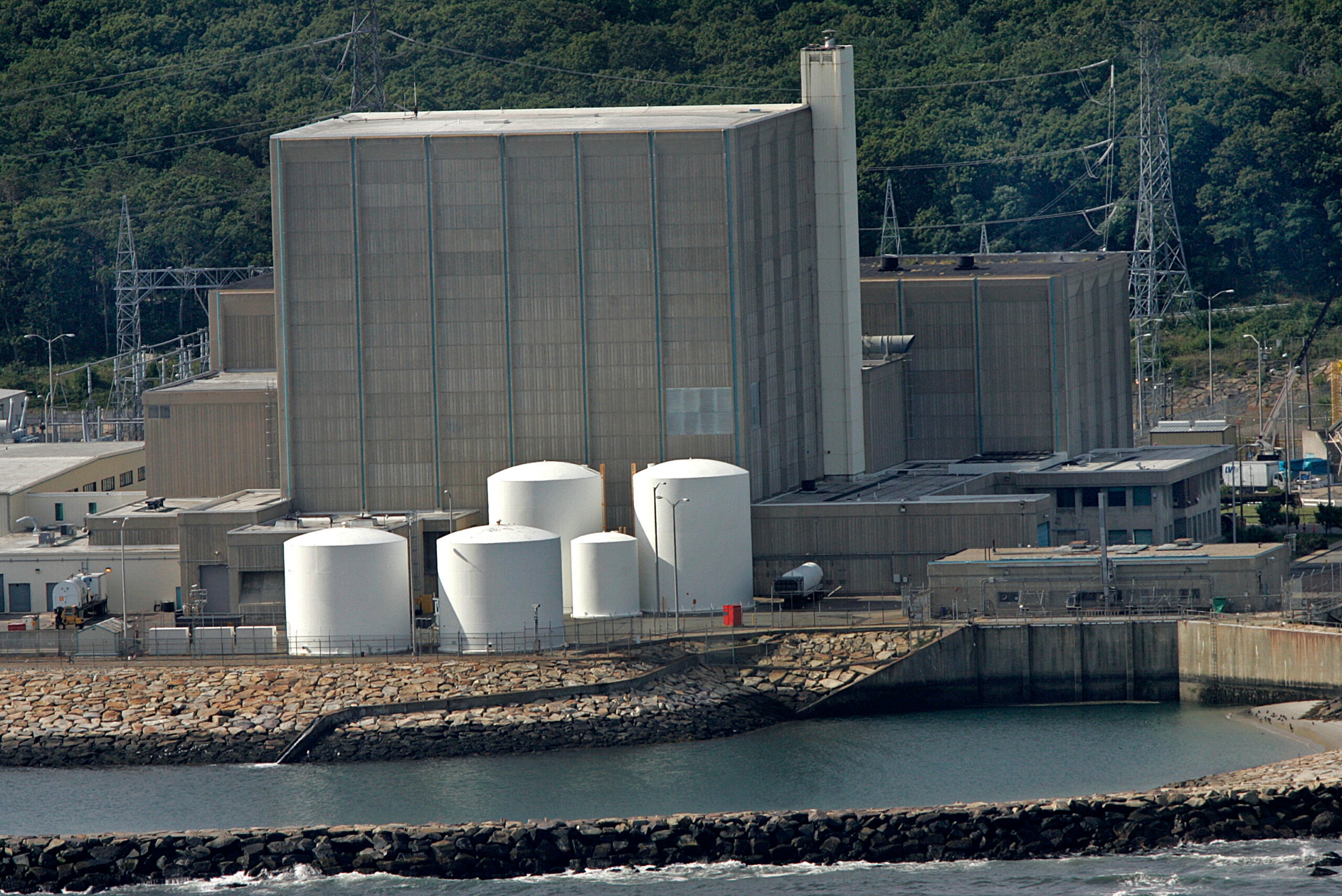 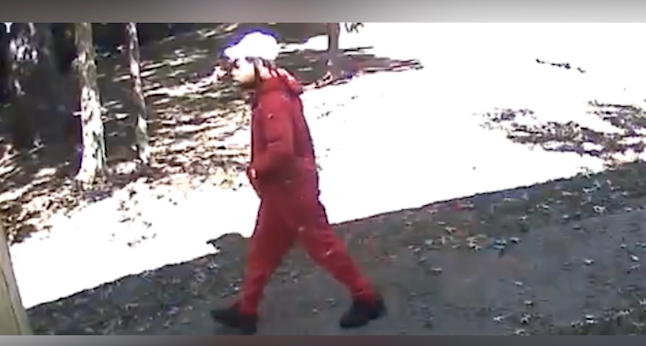